“Not a typical hagiography of a great dead artist”

The French painter Edgar Degas died on September 27, 1917, at the age of eighty-three. Two years later, his private art collection and the contents of his atelier were still being auctioned—and setting records—when one of France’s leading cultural journals, the Mercure de France, published an essay in two installments called Degas and His Model. Written by the pseudonymous Alice Michel, whose true identity remains unknown, it tells about the experience of the artist model “Pauline” posing for Degas in 1910. Translated for the first time into English a few years ago, Pauline’s story offers a fascinating window into Degas’s studio and working practices late in his life, when he was nearly blind. Although Pauline’s exact identity has never been verified, scholars have typically assumed the text to be rooted in the authentic experience of one of Degas’s artist models.

The year Pauline posed for Degas, the artist was seventy-six years old. Though struggling to see, he was determined to work every day in his studio. He was no longer able to paint, however, and so he’d turned to sculpture. (He would stop working altogether two years later, when his decades-old studio and living quarters at rue Victor-Masse were demolished, and he was forced move.) Pauline was posing for the sculpture now known as “Dancer Looking at the Sole of Her Right Foot.” While she needed the money and was loathe to give up the regular income her work with Degas afforded, she hated her time in his studio, where, as Michel relates, Pauline found that “nothing cheered up the somber room, not the smallest trinket or even a cheap drapery.”

As we see through Pauline’s story, Degas’s studio was furnished with a wall of north-facing windows, but he baffled the light with canvas curtains to protect his eyes, thus rendering the huge space dark and shadowy. An array of furniture and accoutrements crowded the space—armoire, easels, sculptor’s seats, tables, chairs, stools, a bathtub (for posing models), frames, empty stretchers, rolls of paper, screens and model stands. Degas feared that sweeping the studio would raise dust and settle on his work and ruin it (which it very well might have). He wouldn’t therefore allow his maid, Zoé, to clean; hence, dirt and grime covered every surface.

Pauline couldn’t keep herself and her clothes clean when she was posing, which angered her. But many other things made the work trying, as well. Degas, who was known to demand much of his models, had Pauline hold an especially painful and convoluted pose: she had to balance on her left leg with her knee slightly bent, grasp the toes of her other foot with her right hand, and turn her head. At the same time, he paid poorly, refused to warm the space adequately, and was often ill-tempered. The young Pauline came to view the aging artist with disdain, even disgust. She frequently saw him as a repulsive and pitiable figure—a “fusty madman,” a “cranky and demanding old buzzard,” “an ogre.” As has been written about elsewhere, Degas was miserly, abusive, self-pitying, classist, sexist, and anti-Semitic, qualities that are by no means excusable and that, as Pauline tells us, she was privy to while in his company.

Pauline is more sympathetic toward Degas—as am I—when she sees the severity of his vision loss, how much he suffered as a result of it, and his heroic dedication to his craft in the face of daunting circumstances.

In terms of his vision loss, even when working only a few inches from where Pauline was posing, Degas could only vaguely see her form. As a result, he would have to get up and touch her when he needed to check such things as the position of a joint, returning to his work to mold what he had felt in clay (he sometimes sculpted in clay and sometimes in plastiline or wax). Other times, he would take measurements using a reduction compass. Yet, though Degas worked for hours every day, as far as Pauline could see, he never seemed to make any progress. As with so many other statuettes he had worked on, she expected him to abandon the one she was posing for. Before he had a chance to abandon it, however, about a year into his work, the armature failed and only bits and pieces of the sculpture were left on the wire skeleton.

Refusing defeat, Degas began anew again and again, but misfortune continued to befall the work-in-progress. On one occasion, a cork he’d stuffed into the plastiline to save on materials worked its way out and destroyed the back of the sculpture. Pauline observed that Degas struggled with the craft of sculpting; likely true, since he was a painter by training.

Eventually, as Pauline had all along expected, he gave up on the sculpture and sent her packing:

“We have nothing left to do together.”

Twice the artist sent her away again, asking that she return a few weeks later; but the third time he welcomed her coldly. Pauline could feel that the sight of her was disagreeable to him, since it reminded him of the unfinished statuette and he wanted above all to put it firmly out of mind. He dismissed her on the spot, with words that she felt were unkind:

“We have nothing left to do together.”

His words made Pauline bitter, and she stopped passing by his apartment.

A year after “Degas and His Model” was published in Le Mercure, several different versions of “Dancer Looking at the Sole of Her Right Foot” were among the 72 figurative sculptures Degas’s heirs had cast in bronze (of the more than 150 found in his studio after his death). Pauline’s story shows us that Degas was a flawed man who behaved egregiously and held terrible views of his fellow human beings. But it also deepens our appreciation of both his effort—and hers—in making great works of art possible. 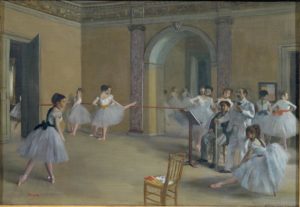